The photo on the right shows the couple Max und Rosa Grünebaum together with Rosa’s father, Julius Scheuer (in the middle). He was the 3rd head of the Jewish community in Bad Soden and head of a successful family business, the “Julius Scheuer Futter und Getreidemittel OHG“. His son-in-law Max, born in Reckenroth in 1878, married his daughter Rosa in 1904 and was made a partner in his company by his father-in-law. Together with their parents-in-law the couple lived in the prestigious Villa Aurora at Alleestraße 24, which Julius Scheuer had built for the family in 1904/05. Max Grünebaum was the last community leader of the Jewish community in Bad Soden.

The couple had a daughter, Frieda (born 1905), who married Fritz Flörsheim and was able to flee to England with her husband and their six-year-old son Paul in May 1938. 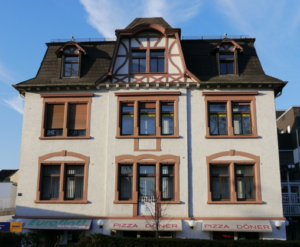 In 1938, the company “Julius Scheuer OHG“ went bankrupt because it was no longer allowed for non-Jews to supply it. On 10 November of that year, Max und Rosa suffered the pogrom in Bad Soden. Their home, the Villa Aurora, was looted and vandalised. Therefore, the Grünebaums left the city and lived in Frankfurt for the following almost three years.

By means of the “Implementing Decree on the Atonement of the Jews“ of 21 November 1938, they also had to pay a so-called “Jewish property levy” of 1600 Reichsmark (RM).

Max and Rosa Grünebaum were probably deported on 19 October 1941 with the first deportation from Frankfurt to the Litzmannstadt/Lodz ghetto in Poland. The date of Markus Grünebaum’s death is considered to be 15 June 1942. The date of death of Rosa Grünebaum remains unknown. 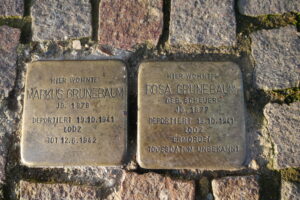 In August 2011, Paul Florsheim, the grandson of Markus (Max) and Rosa Grünebaum from London, sponsored the first Stolpersteine in Bad Soden on private ground in front of the Villa Aurora, his grandparents‘ former home. 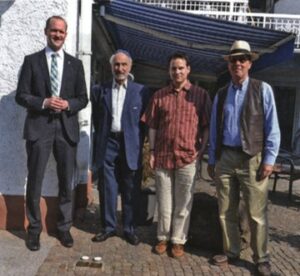 On the 73rd anniversary of his grandfather’s death (15 June 2015), grandson Paul Florsheim (2nd from left), who had travelled from London to attend the anniversary commemoration, placed candles near the Stolpersteine. To his left, Mayor Norbert Altenkamp, to his right, Ingo Heise and Dick Byer, both founding members of the AG Stolpersteine Bad Soden 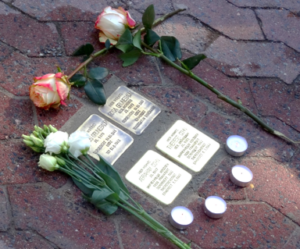 In May 2018, the Stolperstein AG Bad Soden arranged for the two Stolpersteine for Max and Rosa Grünebaum to be moved to public ground in agreement with the grandson Paul Florsheim.

Gunter Demnig set them in the pavement in front of the house at Alleestraße 24, next to the stones for the Cohn couple (Max Grünebaum’s sister and brother-in-law). 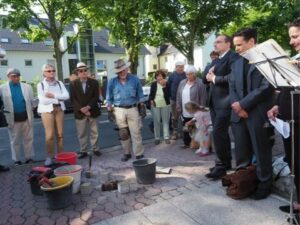 Laying of Stolpersteine on 16 May 2018 in front of Villa Aurora in Alleestr. 26 by Gunter Demnig

Especially at the present time, when anti-Semitism is on the rise again in Germany, it is important to set signals like these, Mayor Dr. Frank Blasch emphasised in his welcoming speech. With the fifth laying of Stolpersteine in the city, he said, there was no longer any discussion about “whether”, but that it had become a matter of course. “Each laying is something special and designed to focus on the individual.”

The translated engravings on the Stolpersteine 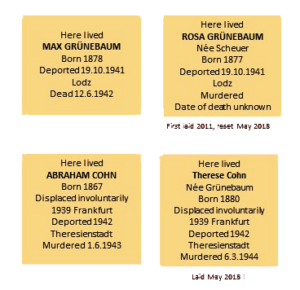