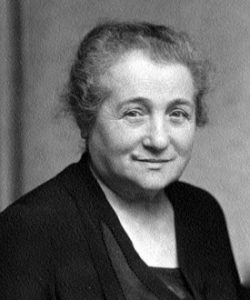 I am reporting here as representative for the stumbling block of Karolina Goldschmidt, who was called Lina. She was born on 25th May 1869 in Runkel/Lahn. She married the cattle trader Moritz Strauss from Niederhofheim. On 22nd February 1895 she gave birth to their son Wilhelm; two years later to their daughter Johanna.

Lina led a kosher household. She strictly obeyed the rules for the preparation of food; for example: milk and meat should not be eaten at the same time. For storage and preparation of the food separate vessels and dishes had to be used. Pork meat is not to be consumed. On Sabbath, which starts on Friday evening shortly after sunset, she had the task to light the sabbatical candles and to say a prayer. Two braided breads loaves of bread were put on the table for Sabbath, as well as the Kiddusch-cup with wine, which were holy essentials for Sabbath. Traditionally this meal also comprised a soup from Matze-dumplings. We know that Hannelore’s childhood friend Rupert Stark always came around to eat Matze. Matze is the unsoured bread of the Jewish people.

Lina Strauss was still alive to celebrate the weddings of her children with Jewish partners. Lina and her husband Moritz Strauss lived together with their son Wilhelm, who was a cattle trader as well, their daughter-in-law Olivia and her granddaughter Hannelore in the house of Neugasse 3.

The family befriended with the families Stark and Neuhaus. Wilhelm’s friend and his class mate was Adolf Stark. The granddaughter Hannelore and Rupert were friends as well. This friendship survived the War. The family Neuhaus lived in a semi-detached house of which the second part of the house was used as synagogue.

When the times radically changed, the children and their married partners prepared for emigration. Their house at Neugasse 3 was sold to family Emmerich. Wilhelm, his wife Olivia and his daughter Hannelore flew from Bad Soden and travelled from Bremerhaven by ship to New York and arrived on 24th December 1937 in New York.

Lina and Moritz Strauss lived on their own at Neugasse 3 together with family Emmerich as the new owners. After falling ill, Moritz Strauss was admitted to the Jewish hospital to Frankfurt, where he died in March 1938.

From that time onwards Lina lived alone without her family in Bad Soden. She witnessed the atrocities on 10th November 1938. The synagogue, which was opposite her home, had been destroyed. Ritual objects from the synagogue had been burnt in the street, the mortuary of the Jewish cemetery had been destroyed, tombstones had been thrown to the ground, from the Jewish sanatorium the patients had been chased out in nothing but their nightgowns and then the building had been burnt down.

Lina was not allowed to go shopping according to the new anti-Jewish legislation and had to rely on the kindness of her neighbors. Entirely on her own she managed to flee to London via Spain in 1938. Cut off from her family and the brutal experiences in Germany, Karolina Strauss had no more vital energy and sadly committed suicide in London.