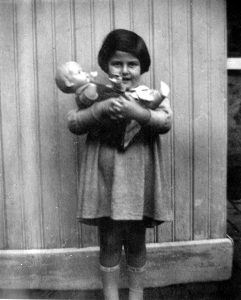 Hannelore Regina Strauss, born in 1929, daughter of Wilhelm and Olivia Strauss, lived with her parents and grandparents Moritz and Carolina Strauss in the same house in Neugasse 3, opposite the synagogue in Bad Soden. The Strauss family and their neighbor family Stark were friends, during the Nazi period and beyond, lasting into today’s generation. Hannelore attended the only kindergarden in Bad Soden at that time, directed by the Protestant Church. The Deaconess Martha Holtmann of this kindergarden was very kind, taking on all children, regardless their confession.

Hannelore showed the synagogue to their neighbor’s children and mother Strauss gave Mazze to them. Hannelore visited the basic school at Sulzbacher Strasse for two years.

The hatred against Jews increased so much that the parents Strauss and Hannelore were forced to emigrate in December 1937 via Bremerhaven to the United States.

The Deaconess Auntie Martha had been expelled from Bad Soden by the Nazi Regime, because she never subjugated to the perverted Nazi ideology.

The last volontary chosen home in Bad Soden was at Neugasse 3.