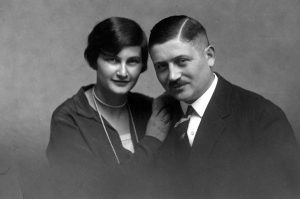 As a kind of member of the Strauss- Krug- Stark – Friendship-Crew, my grandparents Bernardine and Adolph Stark have been close friends and neighbours as well, I do have the honor, the privilege and the permission of the Stolpersteine AG, to tell you a little about dear Olivia and Wilhelm Strauss.

Olivia, we used to call her Ollie, was born on 5th of September 1901 in Crainfeld in the Vogelsberg mountains, the area close to Grebenhain. At that time there had been 900 residents in Crainfeld, a quarter of them had been Jewish and a lot of Olivia`s family members came from the Vogelsberg. Together with her girlfriend Emmy Poppenheim, Ollie studied child development in Frankfurt am Main. As a governess in Switzerland and Germany Ollie earned her first own living.

Wilhelm, we used to call him Willi, was born on 22th of February  1895 in Niederhofheim, the place where his father Moritz came from as well. They moved to Bad Soden, to Neugasse 3. In this part of Bad Soden had been a lot of stables and farm houses, so Willi became a cattle dealer like his father Moritz.

Olivia and Wilhelm married 1928. The whole Strauss family lived all together in the house in Neugasse 3 in Bad Soden. The birth of their daughter Hannelore on the 23th of February made the little family complete. Olivia was looking after Hannelore and doing the cooking. She won the heart of all the neighborhood kids for her excellent cookies, cakes and the Mazzen. This was told to me by my father Rupert, who had fallen in love with Olivias daughter Hannelore at the age of three, a long time ago.

Wilhelm and his family had been involved in the Bad Soden living and the neighborhood. He was a founding member of the Bad Soden Riding Club together with Adolph Stark, my grandfather, and others in 1929. This has been verified in the founding papers. Unfortunately the third Reich laws did not permit Wilhelm to stay in the Riding Club anymore, this signal and many others made it obviously and impossible to stay any longer in Germany.

So Wilhelm, Olivia and Hannelore left Germany in December 1937 from Hamburg via boat. They were asked to look after Lilo Strausser, a very young single Jewish woman, not a relative, but from Bad Soden as well. The contact to her stayed all the time. On 25 of December, they all arrived safely at the United States of America. They moved to Middletown, New York, the town, where Wilhelm sister Johanna already lived safely. Middletown is a small little city, close to New York, not to many residents and with a very nice Jewish community  This strong community gave a lot of power and will back to the new living for all Strauss`s. Wilhelm was able to continue his work in agriculture, turkey farming, dairy farming and cattle dealing. He died on 22 of September 1982 in Middletown. Olivia supported her family on the farms in New York state. She moved after Wilhelm`s death to Hannelores place in Wykoff, New Jersey. She lived there until she died on 5th of December 1996.

When I was able to visit Ollie and Willi, the former close friends and neighbors from my grandparents, we had a wonderful time. I was even able to get the taste of her delicious cakes, this taste is still in my nose. And it will always be a good memory for all of the Strauss family members, as I am in contact with the grandkids of Willi and Ollie, Ken and Joanie, and I am very much pleased, to see you here at this very special day for all of us.