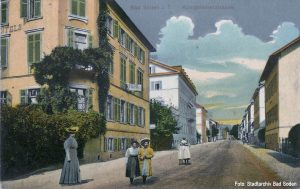 This photo from the Bad Soden municipal archives shows the Villa Rheinfels (Königsteiner Straße 39/corner of Alleestraße) acquired by Michael Neuhof in 1907, where he and his wife Sophie opened up a hotel with a kosher restaurant for Jewish spa guests .

The couple had a daughter, Therese, who was born in Frankfurt in 1882. Michael Neuhof died in 1921 at the age of 68 and was buried in the Jewish cemetery in Bad Soden. From then on, the house and hotel belonged to his wife Sophie Neuhof and their daughter Therese. Until 1925 it is still listed in the Frankfurt Address Book under Michael Neuhof, Gastwirt. Therese was married to Leopold Strausser, born in 1878. In 1919 their first daughter Ilse was born, who only lived 4 months and is buried in Bad Soden. In 1920, their second daughter Liselotte was born in Zurich.

After Michael Neuhof’s death, the young family lived together with Liselotte’s grandmother in Bad Soden at Königsteiner Straße 39. Leopold Strausser worked as a commercial employee with a Frankfurt company. Strauss family (from left: Wilhelm, Olivia with Hannelore) and Liselotte Strausser on the ship “New York”.

After the Nazi seizure of power, their lives were increasingly overshadowed by anti -Semitism. Thoughts of escape must have moved the family. In 1937, they entrusted their seventeen-year-old daughter Liselotte to Wilhelm and Olivia Strauss, who fled to the USA via Bremerhaven, thus saving their own and Liselotte’s lives. The reason why the whole family did not emigrate are not known.

What is known, however, is that the Strausser family was exposed to the angry mob in the course of the November pogrom of 1938. Their flat was partly looted and partly destroyed. There is a hint that Therese Strausser was maltreated in the process.

Sophie Neuhof and the Strausser couple had to sell the Villa Rheinfels in 1939 and were expelled to Frankfurt. Their assets were confiscated except for a monthly allowance.

In November 1939, Sohie Neuhof and her son-in-law Leopold Strausser died in unexplained circumstances. Therese had to bury her husband and mother in the Jewish cemetery in Frankfurt and was left alone. She became a paediatric nurse in the USA, changed her name to Lilo Hanna Strausser when she was naturalised and had family ties to Olivia and Wilhelm Strauss, their daughter Hannelore and their children and grandchildren.

The Stolperstein ceremony took place on 2017.