The decision was dramatic for the parents. Desperately, Therese and Leopold Strausser decided this step in  1937. Their daughter Liselotte was just 17 years old when they sent the young girl on the run to the united states of America. They consigned her to the care of the well respected family of Olivia, Wilhelmn and Hannelore Strauss from the Neugasse 3 in Bad Soden. In December 1937, the four Jewish refugees took the ship in Bremerhaven. A photo showed them on their arrival in New York on Christmas Day. Liselotte is the only one of the Soden family Strausser/Neuhof who survived the Nazi terror. She died with 86 years in the USA. 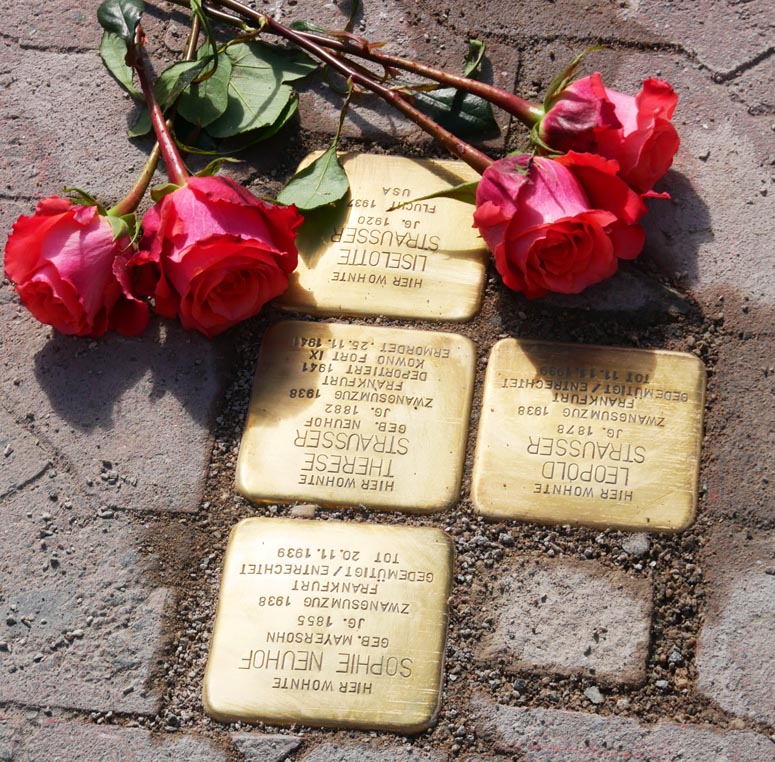 Her grandmother Sophie Neuhof and her parents Leopold and Therese Strausser were expelled from Bad Soden on November 10, 1938 when the Nazi riots also raged in the spa town. In front of their last volontary chosen residence, the villa “Rheinfels” at the corner of the Königsteiner Straße/ Alleestraße, a touching ceremony took place on Tuesday morning. Four “stumbling stones” were layed in the sidewalk by the Cologne artist Gunter Demnigt. Four brass plates which uncovered the sad fate of the late Jewish citizens. “This is the perfect place” said mayor Norbert Alenkamp (CDU). “Nowhere in town so many people pass by”. And he admitted that the first laying in the town were started “a little bit stumbling”.

At the Jewish museum in Frankfurt, at Yad Vashem in Israel and with the help of additional sources Gisela Rückert from the Bad Soden working group “AK Stolpersteine” had investigated and recorded the life roads of the Strausser and Neuhof family. Accordfing to this, Michael Neuhof has bought the “Villa Rheinfels” in the year 1907 and opened wioth his wife Sophie, born Mayersohn, a hotel for spa guests. In the restaurant only kosher meals were prepared. Their daughter daughter Therese was born 1882 in Frankfurt. After the death of father Michael Neuhof in 1921 who was buried on the Jewish cemetery in Bad Soden his widow Sophie, his daughter Therese and his son-in-law Leopold Strausser continued the hotel. His full-time job was trading employee in a copany in Frankfurt.

In the year 1920 Therese Strausser gave birth to her daughter Liselotte in Zürich. When the National Socialists raised the mood more and more against the Jews (a demand for a reconstruction of the hotel was refused 1932) the family decided to escape from the approaching horror. But grandmother Sophie and Therese and Leopold waited too long. After their expulsion 1938 to Frankfurt Leopold and Therese died under unknown circumstances. Did they committed suicide? Their “Villa Rheinfels” were plundered and destroyed by the Nazis. The Strausser family had to sell the building and their property was confiscated. Only a small amount of money was payed each month. The mother of Liselotte, Therese, was deported on the third big depotation on November 22, 1941 to Riga and afterwards to Kowno where she was shot on November 25, 1941.

For Liselotte, the unknown fate of her mother was a heavy burden. In the beginning, both females stayed in contact by letters. Afterwards later on the daughter searched for years by Yad Vashem for her mother. Lisaeloote became US citizen in 1944 and worked as children nurse in a home for Jewish children in New York. All her life she held close contact to the Strauss family.

She never had known this family, said Gisela Rückert on the question why she had done thsi research on the family Strausser, but she cares much about the knowlwedge what happened in the Nazi period and want to pass this to the next generation. This is also important for Annelie Koschella and her family who did not hesitate to take over the grant for the stolperstein for Sophie Neuhof.

For Nikolaus Fitting and his companions this seed seems to open. The 17 year old scholar who has the same age when Liselotte had to leave her parents layed theree roses to the stumbling stones. Since 2013 the young students from the Heinrich-von-Kleist school in Eschborn are tied to the Stolperstein project on Bad Soden. They took grants and care for cleaning the brass surface of the Stolpersteins. The late student of the school, Likas Birovescu, accompanied the lkaying by his clarinet like every year.

The laying of the Stolpersteins for family Strausser took place on Mai 16, 2017 at 9 o’clock a.m. before Königsteiner Str. 39.