Mina (Wilhelmine) Keller was born in 1878 as the 7th child of the Jewish couple Adolf and Emma Keller in Neuenhain (today Bad Soden). In February 1901 she married the Catholic house painter (“Weißbinder“) Adam Kraft “in civil marriage“. Three months later, their son Gottfried was born.

At the request of the Kraft couple, the child was recognised as a Catholic in 1903. Mina herself had church instruction from then on and converted to the Catholic faith in February 1928 (!). She became an active member of the church community.

In June 1910, the Kraft couple took in the 3-day-old foster child Willi Rösch, who later inherited the house painting business. Their natural son Gottfried married into Kronberg in 1926. Their granddaughter Wilhelmine was born the same year and grew up a lot with their grandparents.

In 1930, the family was able to purchase the old “Jewish house” at Schwalbacher Str. 4 (today number 2) , Neuenhain, and moved there. Mina was active in many voluntary activities, including the Red Cross “Fatherland Ladies Club”.

After the Nazis seizure of power, life became difficult for the Kraft family. The painting business was boycotted, a municipal contract was suddenly withdrawn. The granddaughter Wilhelmine remembers that she helped her grandfather carry the paint buckets home without having achieved anything. Money was tight now and sometimes not enough for school books or the granddaughter’s school trip. Willi then helped the “little sister” out. To supplement the family income, the grandparents always had a foster child. Mina Kraft also earned a little money by ironing for other families.

On the night of pogrom (November 1938) Hitler Youths graffitied the family home. The grandparents and Wilhelmine recognised the perpetrators, but the granddaughter did not want to name them later. After the mob had left, the whole family set about removing the graffiti with soap and a scrub brush. They were not to be the last. The Kraft family had no money to escape. When Aunt Ilse (Würzburg) told them of her plans to emigrate to America during a visit in 1936/37 and offered to take her granddaughter with her, Mina did not want to know anything about it because she was very attached to Wilhelmine.

In 1943, at the instigation of local Nazis, the woman known in the village as “Judde-Mina” received a summons from Frankfurt to report for so-called “resettlement” in Hermesweg 5-7 (Gestapo- forced labour camp). It was very painful for her 17-year-old granddaughter to have to accompany her 65-year-old grandmother to Frankfurt to the collection point at the Siemens site. Meanwhile, the other family members were ashamed of the Jewish origin of wife, mother and grandmother. Mina’s first name was supplemented with “Sara“, as had become obligatory for Jewish women from January 1939.

The transport went directly to Auschwitz. She was murdered there in December 1943. 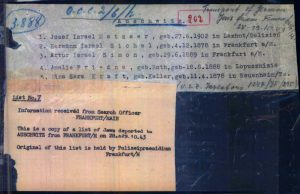 Deportation list of those deported from Frankfurt to Auschwitz on 28.10.1943: On position 5: Mina Sara Kraft

The Stolperstein for Mina Kraft was laid on 4 September 2021 in Schwalbacher Straße 4 (today number 2). For more information see the Stolperstein ceremony of 2021.