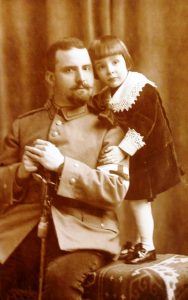 Dr. Isserlin with his son Bruno

The balneologist and long-term head of the israelitische Kuranstalt, Dr. med. Max (Markus) Isserlin, had his roots in Jewish family from East Prussia. He was born on December 8, 1874 in Prostken / Lyck (today Prostki, Woiwodschaft Ermland-Masuren, Poland). From his arrival in Bad Soden in the year 1900 until the november pogroms in the city on November 10th, 1938, Dr. Max Isserlin directed the israelitische Kuranstalt. and was seen as an all-respected citizen and esteemed clinician. Several times he was the head of the doctor society in Bad Soden, invested 1912 in the inhalatory building (Medico-Palais), participated in the local politics and was the head of the synagoge 1907 until 1938. Max Isserlin took part in the First World War as medical officer, being awarded the iron cross medal in 1915.

He bought the villa “Zum Quellenpark 6” as residential building, where he also installed his doctors’s office. After the power takeover of the Nazis he was forced to sell this and to move to the Dachbergstraße.

After he was forcibly expelled from this house on 10 November 1938 and briefly imprisoned, he and his wife Regina, who came from Berlin, managed to escape via Italy to England to join their two children. His wife’s courageous behaviour got him out of prison and the confiscated passports were returned to her. His son Bruno had already fled the Nazi regime in 1933, his daughter Ruth in 1936.
Max Isserlin died in Manchester (GB) in 1965. 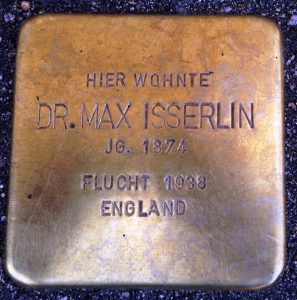 Speech by Ora Goldschmidt (daughter of Ruth) at the STOLPERSTEIN laying ceremony: It is a very special thing happening here today, and
I am excited and happy to be a part of it.

Throughout my and my sister and brother’s childhood, our mother’s (Ruth Baum née Isserlin) hometown and the house she had grown, were a constant presence. Her stories about her childhood in the big house on Hauptstraße 6, which she had lovingly called “Villa Isserlin”; her best friend Hilde Christian, who lived next door; Mina and Liesel, who worked in the house and were an important part of her childhood; her father’s clinic where he saw his patients; the patients, some of whom became family friends; her mother’s grand piano and the singing and playing which went on all the time; the kurpark, the sanatorium, the forest. My mother’s memories remained warm and beautiful, unspoiled by the horrors that followed. I am not going to talk about the holocaust. But I do want to say something about human nature. As a psychoanalyst, it is my belief that lack of empathy to another human being can only occur as a d

On a small scale and for short periods of time, we all dissociate ourselves from other people’s suffering, or do ourselves inflict suffering on others.
On a large scale, a wide and prolonged such dissociation, of one group of humans from another, enabled the holocaust and other atrocities around the globe to happen.
I do not have any pretences to understand how it was, and is, possible for such things to happen, but I do want to say that I see this project of the Stolpersteine (…) and your hospitality extended to us here today, as a counter dissociative act, as an act of joining together of parts of the soul which are so often easier kept apart.

Wrongs that had been done cannot be undone, but this does not mean that we as humans are exempt from trying to do a sort of reparation. I think that the striving to repair, to do and be better, and to include the wrongs of the past in who we are today and who we want and can become, is such an important part of being a whole human being.