The fate of the people of the Israelitic clinic was forgotten for a long time. Therefore, we decided to lay a stumbling block in commemoration for them.

Our stumbling block has 4 lines with the text:

IN MEMORY OF THE VICTIMS OF NATIONAL SOCIALISM

Our chosen laying date was November 10 at 3 pm, the day of the pogrom in Bad Soden. On October 29, 2020, the artist’s office “due to the renewed Europe-wide increase of Covid 19-inified people and the resulting necessary measures… with a heavy heart cancelled all Stolperstein-layings with Gunter Demnig between November 1 and December 3.”

In our AG, we therefore decided to take a path that would not put the public in danger from Corona during the laying of the stumbling block. 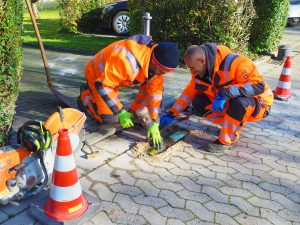 In the presence of the press (our AG member Brigitte Kramer) and together with the very helpful and friendly employees of the municipal building yard (Bauhof), we laid the stumbling block in front of the apartment building Talstraße 12-14. The Bauhof employees inquired with great interest about the fate of the people expelled from this place and during their work an atmosphere of sympathy and togetherness developed among us. After the work of laying the stones was done, we took time to commemorate the people of the Israelitische Kuranstalt, whose fate was so horribly sealed by the Nazis on November 10, 1938. People passing by hesitantly stopped and asked their questions.

Brigitte Kramer’s press article appeared appropriately on November 10, 2020, in which every interested reader could now take note not only of the laying of a stumbling block in Bad Soden, but also information about the pogrom at that time and its consequences for the people. Provided with this information, it is possible to go to the new place of remembrance without exposing oneself to the danger of larger crowds in these pandemic times.