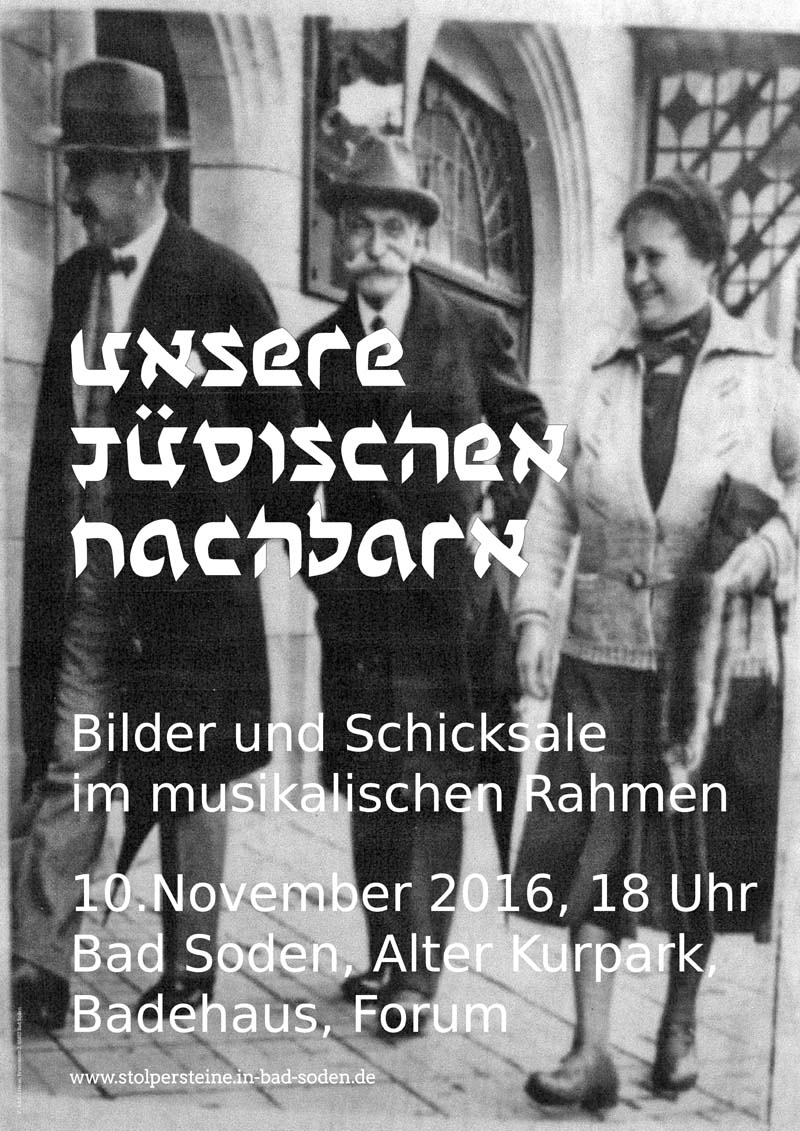 What happened to our Jewish neighbors on November 10th 1938, one day after the “Reichskristallnacht”, when the Nazi mob raged in the ancient spa town? Jewish institutions and houses were demolished and well-esteemed Jewish citizens were expelled. How many Jews were in Bad Soden at that time? How did they live? The event, to which the Bad Soden Stolperstein group hosted on November, 10th was very personal, very reflexive.

The Jewish community numbered no more than 50 members, has Lissy Hammerbeck researched. The cooperation with the Christian neighborhood was generally harmonious. They visited and supported each other.

Julius Scheuer was a German citizen of Jewish faith, head of a successful family business, located at the Villa Aurora in the Alleestraße. With his wife Fanny they had six children. From 1885 to 1907, he headed the Jewish community. He was a generous person, explained Lissy Hammerbeck, who also gave credit to his customers. Two of his children died young; they are buried in the Jewish cemetery in Soden. The oldest son, Emil, committed suicide. After this, the family closed ranks. Julius included the widow of his son, the mother of his two grandchildren, in the family business. Julius Scheuer’s daughter Rosa married Markus Grünebaum. He was the last head of the Jewish community in Soden. How their house looked like after the devastation of the Nazi mob – broken windows, curtains hanging down and torn, wrecked furniture – was described by the eye witness of Dr. Dietmut Thilenius, who, at that time was seven years old. She had seen it on her way to school. And she described how her mother was distraught at that day. “I had never seen her cry”, Dr. Thilenius said.

Students of the Eschborn “Heinrich-von-Kleist” school recalled the fate of the family of Dr. Max Isserlin. With their history teachers, they have dealt with the issue in autumn 2013 and taken over sponsorship for the Stolperstein for the Soden doctor. Dr. Isserlin led the Israelite Spa, was President of the Medical Association and head of the Jewish community at that time. He invested in the construction of the inhalatorium building, now known as the “Medico Palais”. He and his wife Regina managed to flee to England before 1939. Their two children had previously been sent to London in safeness.

The Strauss family was tragically torn apart. Moritz and his wife Karoline lived opposite the synagogue in the Neugasse 3. He was a cattle dealer and since 1924 beside Dr. Isserlin the second head of the Jewish community. Their son Wilhelm and theier daughter-in-law Olivia, were very popular in Soden. Wilhelm was co-founder of the Sodener riding club in 1929. With his wife Olivia and daughter Hannelore, Wilhelm went by ship to New York in December 1937. Also the daughter Johanna, her husband Gustav Barmann and their two children Kurt and Ruth had to emigrate. The parents, Moritz and Lina, had to remain.

When today the tone gets rough, urged Mayor Norbert Altenkamp, we should commit “with civic engagement for a future-oriented, open and tolerant society”.

The presentation as video:

This site uses Akismet to reduce spam. Learn how your comment data is processed.